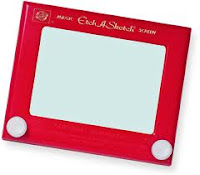 By nature, I'm not a huge fan of change. But this year especially, God had ways of helping me transition into new phases of life. Unfortunately, those ways included miserable and sometimes humiliating circumstances that subsequently led me to actually crave the very change I once was dreading.

For instance....the night before I turned 40 began with a giant argument between my husband and son that led to a long drive with our dogs that included a stop at a friend's house, whom I hadn't seen in many years, who innocently brought her dog outside with her to greet us which ended with me standing outside her house trying to hold a normal conversation while our mini-van rocked back and forth with the sounds of our dogs ferociously attacking the windows while our daughters screamed and my husband periodically yelled "KNOCK IT OFF!"

As if that weren't bad enough, I arrived home to find red Kool-Aid dribbled across our beige colored Rec Room carpet and as I hauled out our carpet cleaning machine, my husband half-heartedly said, "I'll do it" but then remained in the bed under the covers watching football. Thanks for the offer.

I got the carpet cleaned and loudly announced that I was crawling into bed with my library book for the remainder of my 39th year of life on this earth and that I wasn't getting up until I turned 40. Ten minutes later, C puked on our sheets. I had to get up. I was still 39. Don't ever tell me that God doesn't have a sense of humor.

Needless to say, I welcomed 40 with open arms.

Remember that "To Do" list I mentioned in my previous post? Well, God gave me my next assignment. At first it didn't seem that hard, but as usual, Satan got involved and stirred up crap that ultimately led to a huge fight with my husband on New Years Eve.

But the beautiful thing about an Etch A Sketch is the ability to shake it clean! Do over! Fresh start! Clean slate! Blank canvas! A new beginning to create new amazing images and lasting memories.

But in order to do that, you've gotta shake off the old. Forgive yourself. Forgive everyone around you. File away the awesome memories you created last year. Leave behind the craziness you'd rather forget. Take note of any negative situations and make the necessary adjustments in an effort to create peace for yourself and your family. And by all means, make a conscious effort to protect your Etch A Sketch.