Dumplings, Cobblers and Pies, oh my! 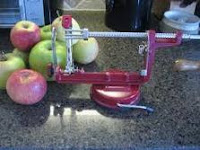 We're extremely blessed to have two giant apple trees in our backyard. They were already here and well established when we moved in, which is the only reason they're still alive. The first year we were here, we got to experience the wonderful benefit of having our very own source of fruit at our fingertips, so we decided to take things a step further and planted grapevines, strawberry bushes, a cherry tree, and a peach tree. I weedwacked the grapevines in a moment of weedwacker rage, (see earlier post for my history with the freaking weedwacker). Our strawberry bushes produced a giant crop one year, but under our not-so-watchful eye, C ate them all. Eventually they were overtaken by weeds and ended up under our freshly poured concrete patio. Bye bye strawberry plants. Japanese Beatles devoured our cherry tree. Our peach tree, on the other hand, seems to be thriving and produced a whopping crop of four peaches this year.....C ate three of them. Hers likes her fruits.

But every other year, like clockwork, we get a bumper crop of delicious and beautiful apples. This was our year. During a cookout we hosted back in July, a friend asked me what we do with all of those apples and I told him that I spend several weeks picking, peeling, coring, and freezing them to make yummy apple desserts all through the winter. He asked me why it took several weeks and when I explained that I use a potato peeler he looked at me like I'd just sprouted an apple tree out of the top of my head. "You don't use the apple machine?!?" he asked. (What the heck is an apple machine?) Well, I was about to find out.....

When my apples were ready to pick, we wasted no time in tracking down this miracle apple machine and found one at Meijer for $9.99. Awesome. That Sunday afternoon I asked my husband to please pick me as many apples as he could. Apparently what he heard me say was "Duct tape empty trash bags into the trees, climb them like a monkey, and shake the limbs as hard as you can so that the apples fall into the bags." PS. That doesn't work and he was taken off 'picking' detail which was probably his intent.

The kids and I picked several bags of apples and excitedly attempted our apple machine. By the end of the evening, Z had sliced open three of his fingers, the thing wouldn't suction to the counter as promised, one of the prongs broke off in an apple, (I assume we'll find that in our next cobbler), and I only ended up with two freezer bags of apples because that stupid apple machine took the inside of the apple right along with the skin of the apple and I was left with tiny curly ques of apple nubs by the time it was done. This thing is supposed to save time, not cause more work and mame my only son and all I wanted to do was beat it against the floor and throw it out the freakin window. (I have rage issues.)

So I'm going to pretend that you've asked me to rate this machine for your future reference. I give it a D+. But if you're in the market for high blood pressure, bloody fingers, and a foul mouth, you too should get the apple machine. It'd be perfect.

Just for fun, here's a recipe for my easy Apple Cobbler:
1. Peel, core, and section 10-12 apples and place them in a 9 x 13 pan sprayed with non-stick spray
2. Sprinkle generously with cinnamon
3. Combine 3/4 cup of brown sugar and 1/2 cup of oats and sprinkle over the top
4. Pour 1/2 a box of dry white cake mix over the top and stir it all together.
5. Place several pats of butter all over the top and bake uncovered @ 350 until the top is browned, then stir and cover with foil and continue baking until the apples are tender. (About an hour cooking time total.)
6. Added walnuts are delicious, but optional. I only add those when I want to witness my husband throw a dramatic temper tantrum....because that's kind of fun.
Enjoy!!
Posted by ~Sassy~ at 7:55 AM